Why Is Inflation Rising? Here’s What Investors Need to Know

The latest inflation numbers are the highest we've seen in nearly 30 years. What is causing the inflation, and what could it mean for your investments? In this Fool Live video, recorded on June 16, certified financial planners Matt Frankel and Robert Brokamp discuss the inflationary environment and what investors need to know about it. 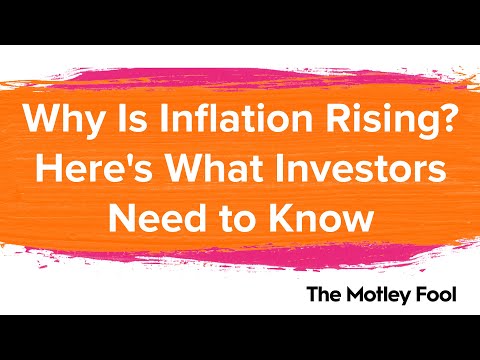 Matt Frankel: Inflation is kind of on the top of everyone's mind right now. I mean, just from a practical standpoint, if you've gone out to buy anything recently, you've probably noticed things are getting more expensive, especially in the sectors that are really heating up, like travel, for example. It costs a lot more to fill up your car right now than it did a year ago because of just basic supply and demand. Anyone remember when gas was about $1.30 a gallon in last March when nobody was driving? That would've been great if there was anywhere to go. But inflation is really causing some of these prices to creep up. In May, producer prices were up 6.6% year over year. Consumer prices were up 5%, core inflation is up 3.8%. That's the highest inflation rate since 1992. Prices were up by about 0.6% in May alone. That's a pretty big month-over-month gain. 0.6% doesn't sounds like a big number, but when it comes to inflation, that much in one month is pretty big. There's a few things that have been causing this. Loose Federal Reserve monetary policy is one of them. There's a big Fed meeting, you'll see the decision today. You will probably see a lot of market volatility in one direction or another after the two o'clock hour today. There are other factors, too, it's not just the Fed's monetary policy that everyone seems to want to blame it on. Supply chain disruptions are really playing a role. If anyone has been by a new car lot in the past few months, I don't know about you, but all the car lots by me have like three cars in them where they usually have about 150. My used car is worth more than I paid for it new two years ago. It's crazy, I know.

Robert Brokamp: That is amazing.

Frankel: I bought a new Ford SUV two years ago. I got a good deal. But right now the used car prices for the same vehicle, two years old are more than I paid for it new because of supply chain disruptions. It's not just in the vehicle industry. There's these are going on. I walked into a restaurant the other day and due to supply chain disruptions were out of certain things and were lower on certain items, so that can really drive inflation up. You're seeing that a lot right now. There's also a lot of wage pressure right now. There's a significant labor shortage due to a ton of different factors. But it's really, in a good way, causing wage inflation. But that makes things more expensive for producers which gets passed on to the consumer. Why am I talking about this? What does this mean to your investments? During inflationary periods, the short answer is that high inflation is bad for stocks in general even if the stock market returns the same. If inflation is say, 5% as opposed to 2%, you're talking about a 3% lower real rate of return. Historically, stocks have produced the best real rates of returns, including inflation. When inflation is running at about 2%-3% percent per year. In high inflationary periods, value stocks tend to do better, growth stocks tend to be worse. As the word inflation came into every headline earlier this year, a lot of the growth stocks we talked about a lot of the Motley Fool did not do so well. All of a sudden, my portfolio of banks and real estate stock seemed pretty good. Inflation effects your portfolio in a lot of ways. Historically, the S&P 500 still average as a positive return inflationary periods, it's important to mention. But inflation does tend to cut into stock market returns, it does tend to reward value investors and punish growth investors. But it's not something to be feared. Inflation does not how to control yet. There's no real indication that it's going to get out of control. We'll get some more clues on where the Fed sees inflation and when they see rates rising and things like that. But for now, inflation is a little heated, which was to be expected given the the supply chain disruptions, the wage pressures, and the current accommodated monetary policy, not to mention all the stimulus that's been injected. Bank of America CEO Brian Moynihan yesterday said spending is up 20% from pre-pandemic levels, consumer spending is up 20%. That's across credit cards, debit cards, and the Zelle money transfer platform. All of them are up about 20% from 2019 to June levels. This is all causing inflationary pressure, but it's nothing to worry about just yet.